From liveaboards in lockdown to DIY at home, dramatic escapes and amazing adventures, here are some of our highlights from 2020

Covid may have put a spanner in the sailing this year but it didn’t stop the influx of amazing stories from DIY-ers, liveaboards and cruisers across the globe. Thank you for battling through 2020 with a drill in your hand, a wreck in your yard and a grin on your face. You’ve certainly kept us on our toes!

January was all about lessons learned at sea. Dhara Thompson reflects on a challenging autumn voyage to Spain – “We slipped out of Brighton Marina in early October intending to make a non-stop passage to A Coruña. We finally arrived in Baiona a month later, but what a lot of lessons Biscay and the Brittany Coast had taught me!”

Meanwhile, on the other side of the Atlantic, Roger Hughes takes some friends out sailing for the first time and gives them a valuable insight into the many things that can go wrong on a complicated cruising boat.

We took a trip down memory lane in time in February to look at the nostalgic, ground-breaking and innovative boat designs of the past 70 years. From the brand new fibreglass and plywood constructions of the Fifties to the enduring classics of the Eighties and the launch of a legion of new 58-60ft designs of the 2010s, causing some observers to note that ‘60 had become the new 40’.

On the eve of the Covid lockdown, Max Liberson decides it’s now or never if he wants to get his gaff-cutter Wendy May from Canvey Island to her new home in Newport, South Wales. The problem is, he needs to also tow a 10ft wooden dinghy. Wendy herself is only 26ft and the forecast conditions are pretty choppy. The solution? A DIY anti-surf device, which works a treat. 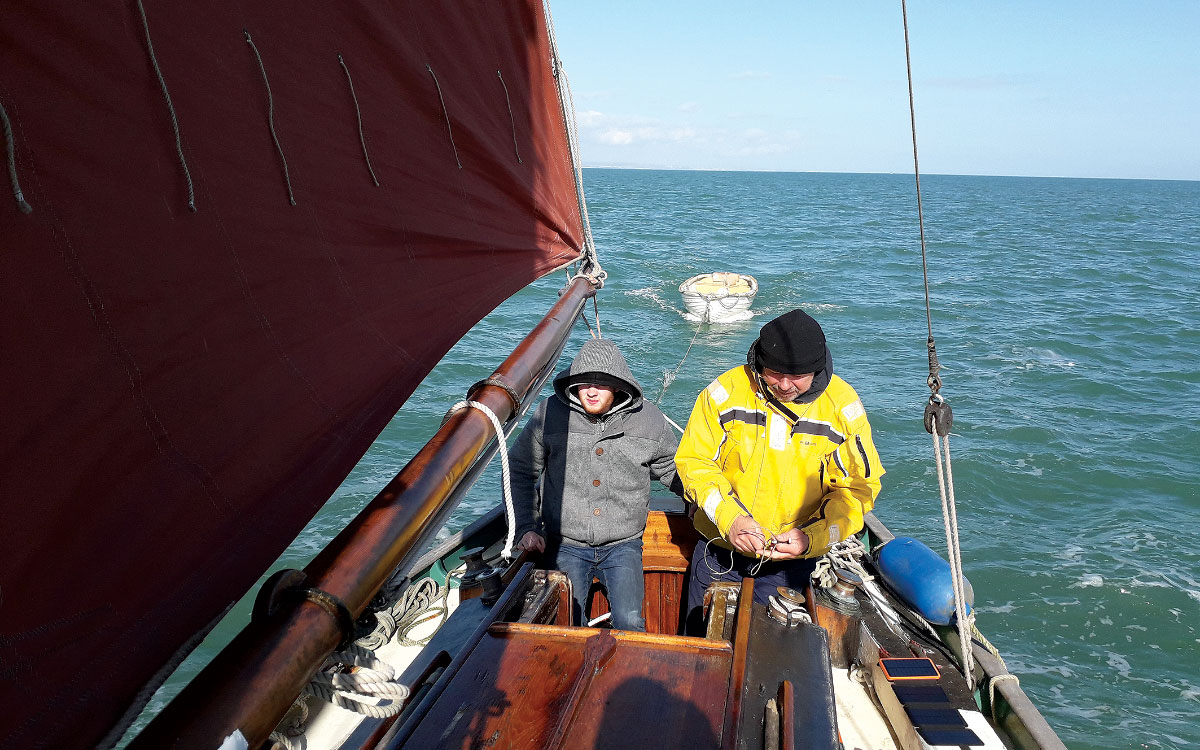 In normal times we’d cover a lot of ground in Practical Boat Owner, but in lockdown conditions it made sense to hone-in on the projects you can complete at home. We got to work, and by the end of the month had well over 100 projects and counting. Whether engines, canvaswork, woodwork or ropework, we found plenty of DIY ideas to keep you busy in the workshop.

How to make your own electric outboard using an existing outboard leg, prop and gearbox

For the most ambitious, there’s the eight-part series on building your own Nigel Irens 14ft rowing/sailing skiff with free downloadable plans, right down to the smaller projects such as How to make a simple small boat shower or how to make a splicing fid from a pen. For anyone with an interest in electronics, don’t miss the 4,000-word epic Build your own electric engine.

Click here to view all 100+ DIY ideas from home

May – back on the water for some

Welcome news came in mid-May when sailing clubs and marinas in England were told they could open, following the relaxation of lockdown restrictions. However, overnight stays on boats weren’t permitted. John Packman, Chief Executive of the Broads Authority, thanked private boat owners for continuing to pay their tolls during the coronavirus lockdown, allowing them to continue the essential work needed for their safe return.

Of course, many sailing clubs were still unable to open, so we switched our focus to Amazing Adventures – cruising stories to inspire those stuck at home. Particularly popular was the story of unorthodox British designer, James Wharram, who takes his family and fans around the world in his handcrafted catamaran, Spirit of Gaia.

Former Rhyl harbourmaster Arthur Davies charms readers with his sedate yet intricate circumnavigation of Wales in a 20ft Vivacity, whilst Michelle Segrest has an entirely different experience on a night passage across the North Sea. “Lights were blinking, the alarm was squealing. There was a ship on the screen in front of me but I couldn’t see it in real life. Why was this so hard? Why couldn’t I figure it out! Help!”

Arthur Davies (left) in Scooby, his wife’s 20ft Vivacity, on completion of his circumnavigation

When PBO went out to St Lucia last year for the arrival of ARC 2019, this dramatic story caught our attention – not least because the family (including 6-year-old Helmi) seems so utterly unflappable. When their rudder fails mid-Atlantic, dad Jarmo Lohikari dives under the hull in big swells to fix it.

Olly Wyatt’s tale is another exciting story we posted in June. Here, the skipper gets more than he bargained for on passage from Norway to Scotland in a Nicholson 32.

Harnessed in and wrapped up warm, the crew stick to a solo watch system of two hours on and four hours off

July – how should we dispose of GRP?

Thanks to the passion and dedication of Practical Boat Owners many old boats enjoy a longer life than ever imagined. However, there are many out there (we’ve all seen them sinking on their mooring) that are beyond repair. There’ll be more too, we suspect, after Covid. Nic Compton’s article in June asks the uncomfortable question, what happens at the end of a boat’s life? And who should be charged for the disposal of abandoned boats?

Excitement rippled through the PBO (home) offices when the news landed that Boats 2020, a brand new socially distanced Boat Show would be coming in September to replace the Southampton Boat Show.

Meanwhile, we were delighted with the deluge of practical features landing in our inbox. Amongst them was a restoration by John Rogers, who’d previously rescued a 1959 classic, Essex Melody. “Few things can be more satisfying than saving an old wooden boat from the chainsaw and bringing her back to life,” he said of his first project, “but this can be a very expensive exercise!” Fortunately, this time round, he manages to restore a stunning Bembridge Scow for less than £500.

September – Liveaboard life in a pandemic

In a gesture as well-timed as Boris’s Christmas lockdown, Boats2020 was cancelled last-minute, after the exhibitors had arrived. MDL Marinas described the move by Southampton City Council as ‘devastating’.

“We are naturally very disappointed for all of our exhibitors, and visitors, who have all made significant investments into the show,” said Tim Mayer.

By now, stories had been trickling in from liveaboards in far-flung corners of the world. We met Hermione Pattison in November 2019 at the start of the Atlantic Rally for Cruisers. Her and her young family have been cruising ever since, spending lockdown in a remote Caribbean island. They’re still sailing and updating their fascinating Liveaboards diary – from an onboard fire to swimming with turtles, spinal surgery and a runaway boat!

October – update your electronics on a budget

With Christmas approaching and budgets tighter than ever, PBO’s gear expert Rupert Holmes takes a look at the cost of marine electronics and how to update your boat without splashing a huge amount of cash on gizmos. “It’s now possible to spend the entire value of an older 25-30ft yacht on electronics and still not have a totally comprehensive system!” he observes. Don’t be daunted… his down-to-earth electronics feature assesses what’s essential and what’s not in the world of AIS, radar sonar and MFDs.

November – self-isolating comes naturally for some of us

Oh no! Here comes the second lockdown and the news that yacht maintenance is not an essential activity. However, recreational boating does at least count as outdoor exercise, which is a relaxation from the first lockdown, when wild swimming was the only way to get on the water.

The topic of self-isolation came up again, with some interesting perspectives from solo sailor Kass Schmitt, who suffered whooping cough during a transatlantic race, and PBO funny-man Dave Selby who admits, “Self-isolating has never been a problem for me. In fact, I’ve been following government guidelines ever since 2005, when I bought my Sailfish 18, and two months later the sheet music for Neil Sedaka’s Solitaire. The two are not unrelated.”

There’s nail-biting news from the Vendée Globe this month when French sailor Jean Le Cam is rescued from his liferaft and Britain’s Pip Hare finds herself match-racing her Spanish rival Didac Costa – both of them in 10-year-old boats launched weeks apart.

It’s also a sad time as we say goodbye to our longstanding rigging expert Mike Coates, who passed away on 11 December. A highly regarded surveyor, Mike contributed to the magazine for over 20 years. Readers will be writing in for a long while yet asking for Mike’s advice and we’re very sad to have to find someone to fill his shoes.

Mike’s humorous last article; “The worst boat I ever surveyed” should give you hope that even the most challenging boat projects can’t turn out this badly (and if they do, at least you’ve a good yarn for PBO)!

It’s certainly been a year like no other for Practical Boat Owner, and no doubt for all the boat owners, DIY-ers and sail and power enthusiasts across the globe. Thank you for sharing your stories. We look forward to more adventures (and hopefully the end of Covid) in 2021!