Electric outboard motors (where the motor is outside the hull) fall into three distinct categories, with some overlap: standard electric outboard, rim drives and pod drives, writes Jake Kavanagh

Portable electric outboards have no trouble moving even quite large hulls with relatively little power. This is an ePropulsion 1kW unit pushing a day sailer quite happily. Photo: Bill Doster

The electric motor is either sealed in an underwater casing, or housed above the waterline under a cowling, as in a standard petrol outboard. Keeping the motor below the water helps with cooling and makes an already quiet engine virtually silent. The downside to electric outboard motors is that they are more vulnerable to water ingress if the seals get damaged.

Above the waterline the motor is easier to access, but the transmission is via a gearbox rather than direct drive so there will be some efficiency loss and a little more noise. However, this configuration allows much larger electric outboard motors to be installed as no submersible casing is required.

3 of the best electric outboard motors

Italian-based Mitek makes a series of outboards where the drive is enclosed under a cowling and the power is fed in from a separate battery bank.

“Our outboard sales are focused on the portable market, from 2.6hp up to the newest 15hp and 20hp,” says sales manager Silvia Peduto.

“Mitek outboards look familiar on the outside with a classic ultra-tested construction, but the inside is a completely different story. We have efficiency above 90%, a high and constant torque and lighter weight.

“The status of the motor and batteries is digitally under control on your phone. I would say that real innovation lies in higher efficiency and simplicity. All our products are designed to simplify our lives without compromising our ecosystem.”

During the first lockdown in March 2020, my wife, Kay, and I began musing about the possibility of trying to…

Olly Epsom explains how (and why!) he built his own 1kW electric outboard motor for under £600

Torqeedo has borrowed from big ship technology and placed a ‘swirl energy enhancer’ onto the boss of the propeller. This captures an extra 5% energy from the displaced water, extending battery range

The German-made Torqeedo 1103 Travel typifies a design where the motor unit is submerged. This 1kW motor is roughly equal to a 2hp petrol outboard, but with the obvious limitations of range. The 1103 nomenclature refers to the 1100W battery, which is detachable and weighs 17kg (37lb).

Torqeedo was arguably the pioneer of lightweight electric outboards but is now facing some stiff competition. As such, it has been refining existing models and producing new ones, with the redesigned 603 model (left) out in 2021. Both motors are IP67 waterproof, meaning you can immerse them to 1m for 30 minutes and they’ll still work just fine.

The control handle contains a built-in GPS and has an LCD display showing charge state, speed, estimated range and energy draw. The new generation of motors are exceptionally quiet, as earlier models were known for a distinctive whine. Now, thanks to new technology, the motor is described as ‘little more than a human whisper’ when under way.

A co-operation between Slovenian-based Podkrižnik and Italian-based e-concept, e’dyn is a good example of futuristic design and lightweight construction. The motor is housed conventionally under a cowling and fed from a separate battery bank.

A new ‘Free Time’ line of 2kW, 4kW and 6kW models will be available from 2021. e’dyn is also upgrading its popular 11kW model with a new communications protocol and a 25kW version will be available shortly. As with most modern outboards, energy management is a priority.

“We saw lack of customisable options in our old design so we are working on more open protocol-based systems that are user friendly,” said project manager Tomaž Murko.

“In the future there will definitely be significant improvement in battery chemistry and power management. With our new systems we will be able to replace old technologies or make small optimizations such as communication signals without a problem”. 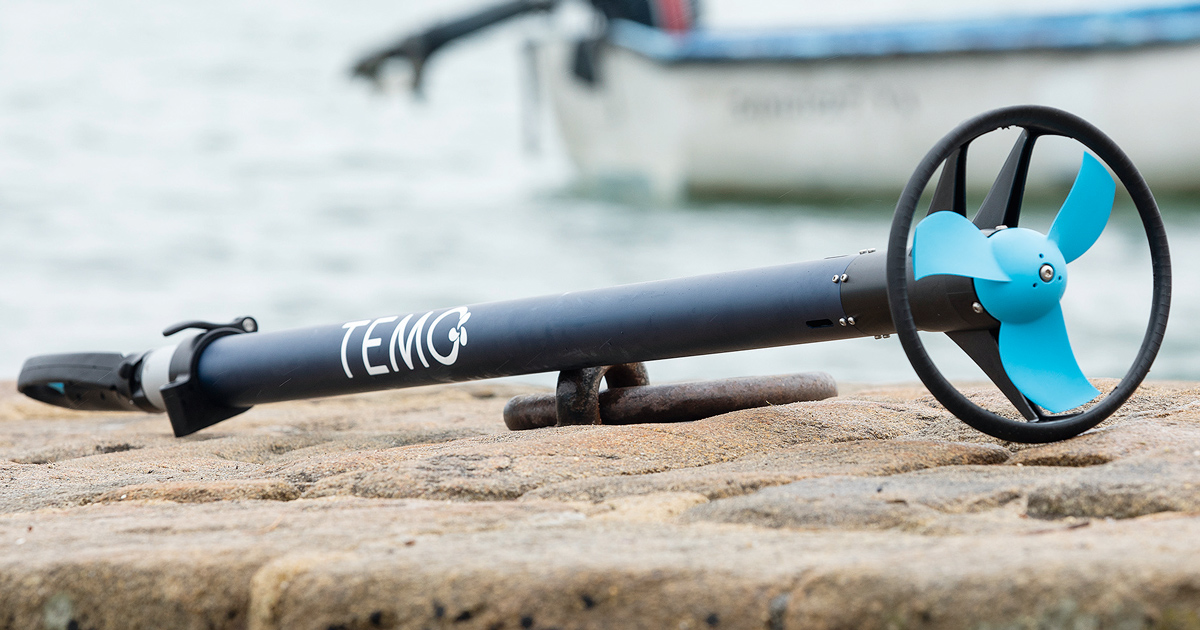 The latest option on the market is the Temo electric outboard, which we recently got a chance to test – you can read all about that in the June 2022 issue of PBO, which is out on April 14.

Developed from commercial shipping applications, the rim drive uses the outer part of the tunnel as the stator, and the inner section as the rotor. Basically, this gives just a single moving part, with all the electrical components ‘potted’ in resin to be completely watertight.

Some designs even have inward-pointing blades, which allow ropes and nets to pass harmlessly through the central void without fouling.

Although a relatively new start-up, the team at UK-based RAD Propulsion has a long history in ‘extreme’ marine equipment. With skills gleaned in autonomous vessels, advanced composites and deep-sea submersibles, the result is a lightweight rim motor that will soon be available in a useful selection of outputs.

The RAD designs are all fully sealed, ruggedly-built in metal and composite and feature advanced electronic protocols that have the ability to ‘learn’ from the motor’s performance.

Energy data is downloaded to RAD HQ for refining the operational parameters as part of an ongoing development programme.

The first model is the 2kW RAD2 and will be followed by the RAD1 designed for paddle boards and kayaks. A larger 40kW RAD40 (pictured) version is due for launch at the end of 2021.

The French company HY-Generation is also exploring the versatility of the rim drive and has made two breakthroughs which, it says, has greatly increased the unit’s efficiency. The first is to introduce a hydrodynamic ‘stall’ into the tunnel to eliminate some of the vortex restrictions associated with high-speed running and reverse.

The result is an improvement in range claimed to be around 35%. The second is with the blade design, which can now pivot freely depending on loading and speed.

This variable pitch is also said to reduce energy consumption and is the principle behind more conventional e-propellers such as Brunton’s Eco Star. The company’s first model is the 6kW RIM6 (pictured) which weighs in at just 12kg (26lb).

Netherlands-based Vetus has developed the E-POD (pictured), a rim drive with a central hub which they say has been thoroughly tested in the ‘bicycle-filled’ canals around Amsterdam and has escaped without damage. “The propeller itself is the rotor of the permanent magnet motor.

Because there are no gears, transmission or shaft, the truly direct drive is extremely efficient,” says Vetus’s Jan van Dijk. “We have calculated efficiency of up to 95%.

“Another huge advantage is there are no rotating parts onboard of the boat, meaning no vibration. Having minimal machinery inside the hull also optimises the available boat space. Having the whole system designed in a ring and tunnel also minimises cavitation.”

A development of the electric outboard, the submersible motor is either fixed to a mounting under the hull, or to a steerable through-hull shaft. Some can even be mounted on the rudder to act as a directional thruster. The power cable is usually fed down through the pod’s control shaft or attachment flange for protection.

Norwegian-based start-up Seadrive began with the premise of a steerable ‘puller’ (pictured right) or ‘pusher’ pod capable of efficient regeneration. Most striking is the swept shape of the propeller, which spins efficiently when sail-milling. The control unit has also been set to optimise the energy produced.

The Seadrive unit is also rotatable for directed thrust and can be turned through 180° so the propeller is facing forwards (or rearwards on ‘pullers’), opposing its usual drive orientation.

This greatly improves the auto-rotation speed, something already used by companies such as ZF on their steerable re-gen saildrives.

Italian company Sealence has developed a pod drive with some closely guarded technology within its ‘aircraft jet engine’ style cowling.

The drive compresses and ejects water electrically and is designed to run from a generator, although it can also be battery fed.

Originally intended for fast ferries and large yachts, the DeepSpeed model is also available in much smaller units for leisure craft.

ePropulsion has taken its outboard motor technology and developed it as the EVO range of pods. The big advantage of this design is it also produces significant hydro-regeneration, but no loading is placed on the prop until a suitable speed is achieved.

The company is using advanced electronic protocols to maximise battery efficiency with mobile phone apps to keep tabs on range, energy consumption and speed. The EVO is offered in three units: 1kW, 3kW and 6kW.

‘Best electric outboard motor: 9 of the best options on the market’ first appeared in the July 21 edition of Practical Boat Owner. For more articles like this, including DIY, money-saving advice, great boat projects, expert tips and ways to improve your boat’s performance, take out a magazine subscription to Britain’s best-selling boating magazine.

Subscribe, or make a gift for someone else, and you’ll always save at least 30% compared to newsstand prices.