A 30ft Dutch yacht with a broken rudder was rescued in treacherous conditions just west of the notorious Shingles Bank off the Needles Rocks, Isle of Wight.

Yarmouth RNLI Lifeboat, Eric and Susan Hiscock (Wanderer) went to the aid of the stricken vessel at 3.15pm yesterday, 3 August.

The tides of the Solent and the Channel meet in this area and it is renowned for its dangerous seas.

The wind was gusting near gale force making the task of establishing a tow very difficult for both the lifeboat and the yacht in such rough conditions.

The yacht was so close to the shingle bank that it was able to try to anchor before the lifeboat arrived. Although the anchor was holding, the yacht was rotating round its anchor in the violent seas making the lifeboat’s approach dangerous.

The yacht’s crew were asked to cut the anchor which made her more approachable and the lifeboat was able to secure a temporary tow from her bow to pull the yacht clear of the shallows.

Once in calmer waters the lifeboat crew were able to establish a safer tow back to Yarmouth where they arrived at 5.50pm.

A view through the photographer’s lens

While dealing with a grounded yacht, GAFIRS rescuers were tasked to another emergency after a yacht hit the submarine barrier…

A French yacht grounded on Brehon Tower rocks between Guernsey and Herm.

Two people were rescued and a sinking yacht saved off the Jurassic Coast of Dorset this morning. 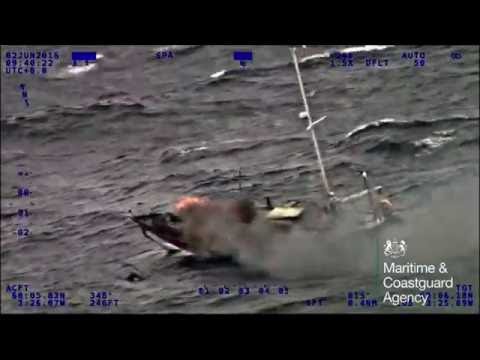